Since I was a young girl, I have always been drawn to vintage and antique elements.  These elements held an allure, a spirit, a craftsmanship that I rarely witnessed in our society today.  Antique furniture, clothes, books, pictures and a wide variety of adornment held a pleasurable, familiar feel, and I felt the richness of life when I came into contact with them.  When I was 15, my father asked me what I wanted for my birthday.  I said I wanted something antique so he took me to the antique store where I picked out a piece of furniture that needed some love.  We took it home and worked on it together to bring out its beauty.  I still have it today.

When I began crafting jewelry about 15 years ago, I became fond of collecting old and rare beads from other countries, as well as rustic old pendants and charms.  Weaving these elements together helped inspire and resurrect some fundamental aspect of my being...here, my imagination grew and my ideas about who I was as a woman began to change.  Who would think that creating jewelry could spark this process in me.  Yet it did and I have found that every avenue of creativity has the potential to do just this.

One day, about 5 years ago, during a visit with my grandmother Grace, I came upon an old box of pictures.  I was fascinated and asking question after question, wanting to get a better understanding of the people in those pictures, the time they lived in, to gain sense of the story of their lives.  I wanted to know my grandmother better, know my mother better, know more about my mother's side of the family.  I loved the way the pictures looked, the way they smelled...I loved their style.

I came across a beautiful picture of a man, woman and child with a large bow in her hair.  None were smiling as that was not the custom during their time.  I was drawn into this picture and looked closely at the details, wanting to sense into those unknown faces and souls.  I was particularly drawn to the woman, who was wife and mother.  I noticed her hair, her dress and jewelry.  I then put the picture down and went back to the box.  It was here that I uncovered a moldy leather clutch purse and brought it out.  I held it up to my grandmother and said "look at this!"  "Do you know who's this is?"  She didn't and told me to open it.  When I did, my heart picked up as I reached in and pulled out the large black beaded necklace the woman in the photograph was wearing.  It was coming apart and so I had to hold it together as I showed it to my grandmother and her friend.

I laid the necklace down and went back to the purse.  It contained a bank book, a small bible, a belt with the letter 'O' on it, a hankerchief, small celluloid mirror from the Jamestown exposition in 1907, and a petite leather change purse.  (shown below) 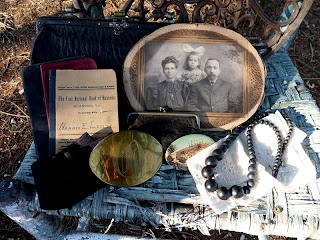 My grandmother was not certain who these people were and said "well that little girl may be your grandfather Charlie's mother."  My grandfather had died a year prior so I couldn't check this out with him.  My grandmother told me to take these things home if I wanted.  For some reason I did, and they sat for a couple of years on a shelf where I didn't pay much attention to them.

Well about two years ago, that picture began to draw my attention again.  For some reason I cared about the story of this woman in the picture.  I felt there was something I wanted to do to honor her.   I began putting some of my loose coins in her change purse and sat this by her picture.  She seemed to be a woman who had kept some of her own money.   Later, through a series of events, I found a family member who lived locally to help me understand who she was.

Her name is Ora Leslie Mayfield.  She is the mother of my great grandmother, Aileen Mayfield Hough, who is the mother of my grandfather Charlie, who is the father of my mother, Charlene.  She died in 1907 in the flu epidemic when my great grandmother Aileen was very young, around the age of 6.  1907 was the last entry in her bank book.  I discovered no one really knew about Ora.  Amos Mayfield, the man in the photo who was her husband, married again, and life went on.  I don't get the sense that anyone really talked about Ora.  I don't think it was 'polite' to talk of such things in that day.   My great grandmother must have held onto these things of her mother's, and yet just packed them away.

I restrung Ora's necklace.  I found some old sinew thread, just like the original thread and redid the necklace, just as it was.  I washed her hanky and my husband Kim cleaned her leather purse.  I feel grateful to have discovered just a bit of her story.  And somehow, this experience has opened me to a new level of creating with my jewelry.  I have, once again, come back to my love of vintage and antique ornament, many from the time that Ora would have lived, and am learning to assemble these into one of a kind handcrafted jewelry.  Each piece I create becomes an altar of sorts, a testimony to a feeling, a sacred time and theme.  It is interesting how this experience with this old photograph helped to deepen my creating.

May every woman's story be told...
May you continue discovering and deepening your sacred story and creativity.
Posted by Lizbeth Clay at 4:31 PM 8 comments:

Lizbeth Clay
Hello, and welcome to my blog 'The Handmade Life.' Here I celebrate the universal need to create in all its wide variety of forms and venues. More specifically, this blog will be centered in 'Woman Craft', a term I use to describe every woman's creative impulse to craft the life of her choosing...to live authentically, vitally and directly.